After I learned the basics of Alloy, I wanted to use it for anything practical. Well, maybe not exactly practical, but more grounded in what we consider "software engineering".

Before diving in, let's clarify some terminology. According to clear and concise Martin Kleppmann's definition, backward compatibility is:

This stands in contrast to what forward compatibility is:

The question that inspired me to write this post struck me when I was studying documentation of Confluent Schema Registry, a service for capturing how schemas (originally Avro, but also others) evolve within your organization over time. Its documentation contains the table summarizing various compatibility types available in that product. The thing that caught my attention is the distinction between BACKWARD and BACKWARD_TRANSITIVE.

Here we arrive at the question motivating this article: does BACKWARD imply BACKWARD_TRANSITIVE? If not, why?

To answer this question, I could have thought it over, as in "use my brain". But instead, I decided to use my brain to build a simple model in Alloy first, which in turn will reason about the problem for me. Perhaps an overkill, but also a fun exercise.

The end goal of this exercise is to understand whether a property of backward compatibility (in the sense of Avro's capabilities described here) is transitive. It's a biased question: thanks to the distinction drawn in docs, I can already be pretty sure the answer is negative. Therefore, what I am really looking for is a counterexample. For that purpose, Alloy sounds like a perfect tool.

Let's start with specifying that an entity is a set of attributes, each attribute is either a string or an integer, and an attribute can be optional. I am intentionally describing only a small subset of Avro, just enough for my use case.

Let's generate some example schema with run {} for 3 but 1 Entity:

Making sense of diagrams generated by Alloy, while not difficult, takes some time to get used to. I covered that topic in my guide to Alloy, so I'll move to the interpretation without any in-detail explanation.

In short, the above diagram corresponds to such an Avro type:

Sorry for the inconsistent terminology for types between the picture and the Avro schema. Unfortunately, both string and int are reserved words in Alloy, so I had to resort to Str and Integer in Alloy.

The example schema looks reasonable, so I can proceed to the next part. I'll start with defining what deleting an attribute means:

Let's generate some diagrams with run delete_attribute for 3 but exactly 2 Entity: 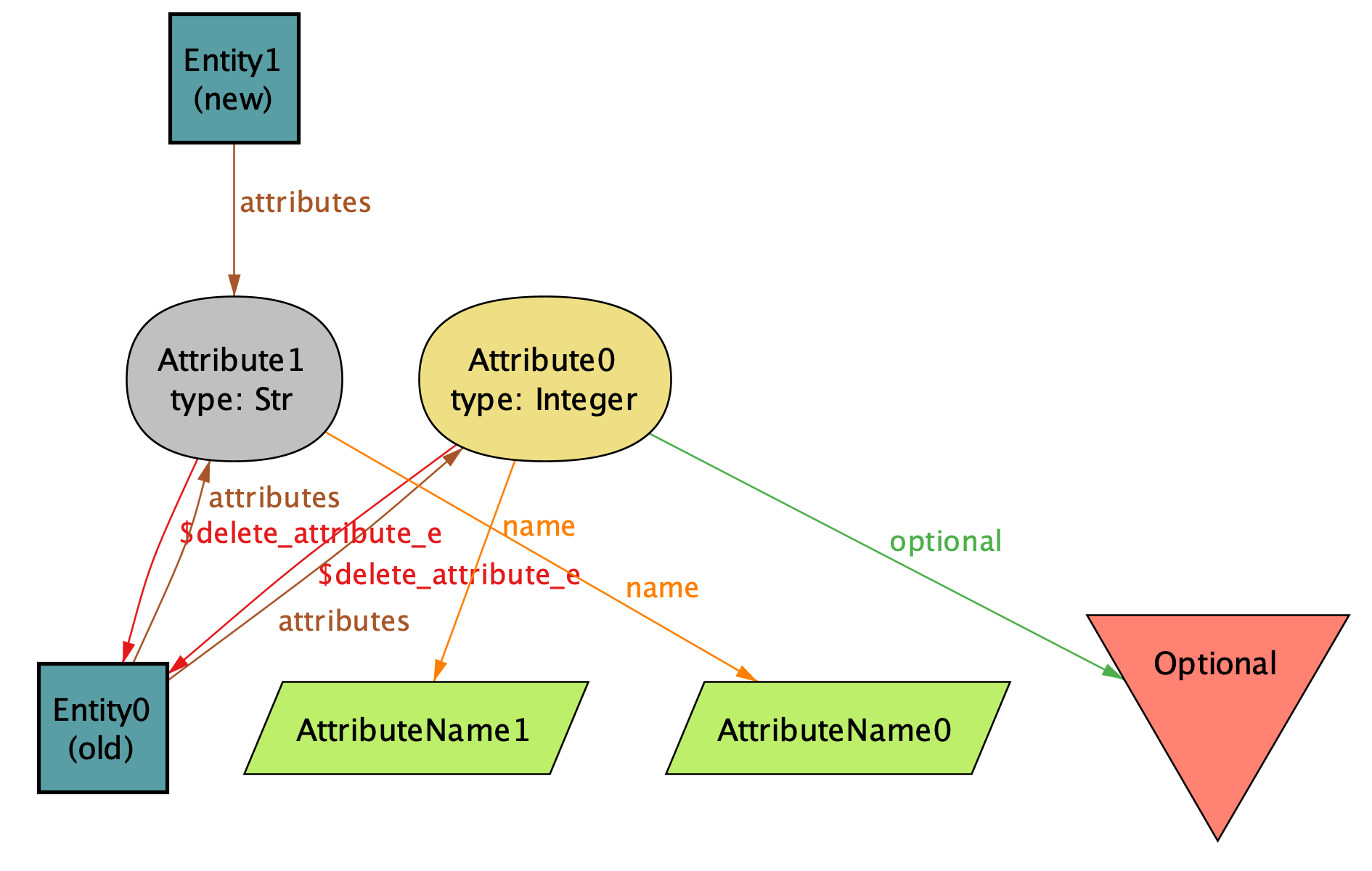 The above is an example of a schema migration of Entity0 that removes its Attribute0. The result entity is called Entity1.

As you may remember, another backward compatible change is adding an optional attribute:

Next I need a definition of can_read and transitive:

Now, finally, I can set Alloy on a mission to find a counterexample:

No surprise here, it did find an example. One of counterexamples found: 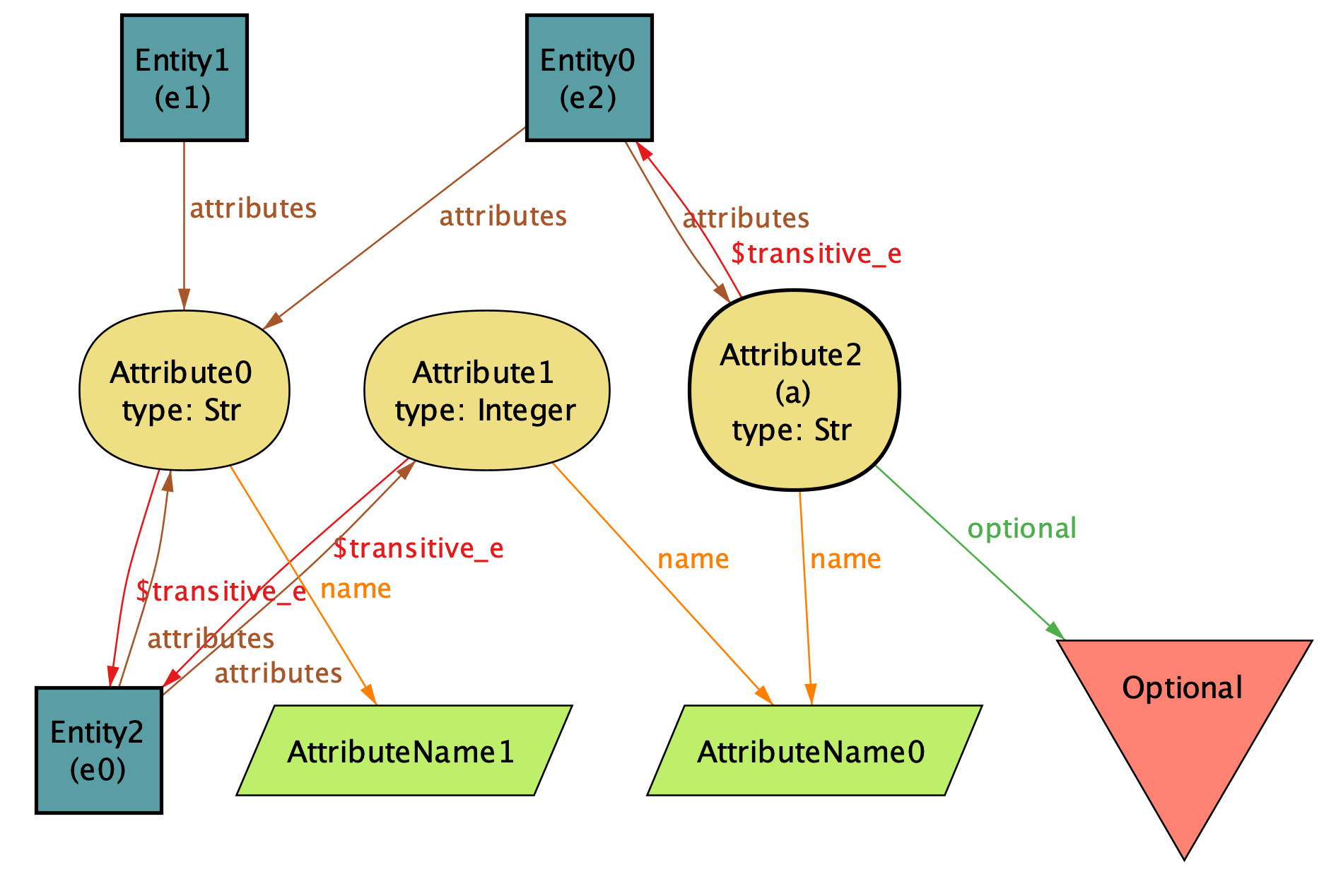 e1 is e0 minus AttributeName0:

e2 is e1 plus AttributeName0:

Could this sort of counterexample be found by "just thinking hard enough"? Sure, especially in this case, where the problem space is relatively small. Anyway, it was a nice toy example to play with. Also, some code archeology suggests that authors of schema-registry originally were not aware of this issue, so it's not a trivial example.

The other consequence of this finding is that it is not enough to look just at the current version of the format you're planning to modify. Even a seemingly innocent change, like adding an optional field, might be backward incompatible with some versions in the past.

Don't get me wrong, being compatible with just one version behind is enough in many situations. An example might be two internal services communicating with a protocol with schema. In such cases, compatibility is important just to extend to avoid deployment dependencies. However, you still operate with the assumption that both services will be updated in a matter of days. So, in case of a subsequent update, you can again consider just the current version. Yet, there are as many situations where you do care about more versions, e.g. when you don't control lifetimes of all components involved. Then you need to be mindful about verifying somehow more versions. Also, some formats makes this kind of mistakes harder, e.g., retiring a field in protocol-buffers keeps that field in the protocol definition.

Concluding the exercise, Alloy proved to be a good "thinking enhancer". It's been a tiny adventure, to the next one, hopefully not in a year!